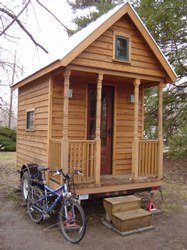 From The Columbia News Service:
When Gregory Johnson says he lives in a tiny house, he’s not kidding. His entire house--an attractive chalet with a bed, bathroom, dining room table and kitchen--is just 7 feet wide and 10 feet long.

“On vacation most people would love to go and live in some little cottage somewhere, a one-room sparsely furnished facility,” said Johnson, who lives in Iowa City. “Nobody ever thinks to live like that on a day-to-day basis. But what I do is, I try to live every day as though it’s a vacation.”

As the American landscape is increasingly peppered with overgrown palaces that many call “McMansions,” homeowners like Johnson have opted for the opposite extreme. These houses aren’t just small, they’re tiny. And unlike the denizens of cramped apartments in cities, the inhabitants of tiny houses choose to live in them not despite, but because of their miniature size.

Homeowners like Johnson share that frustration and prefer to live in houses without an inch of unused space. Bigger than a child’s playhouse but much smaller than a typical Manhattan studio apartment, the house the 41-year-old built and has lived in since 2003 features metal roofing, exposed stud interior walls and red oak flooring.

The house, which is on wheels and is parked in the backyard of his parents’ house, has been dubbed the “mobile hermitage.” It has electricity and running water, but he chooses not to use them. Instead, he showers at his job each morning and lights the place at night with the LED light from the front of his bicycle. The house has high ceilings and a sleeping loft, which make it feel more spacious, he says.

Johnson, a technology consultant, is the founder of the Small House Society, which has a small but growing mailing list of more than 200, including architecture firms and urban planners. The group’s monthly e-mail newsletter offers tips on everything from housing code battles to homeowners insurance, two common stumbling blocks for enthusiasts.

Many owners of tiny houses are driven by a commitment to preserve the environment. Fewer building materials, they point out, mean reduced building waste. And because the houses are easier (and cheaper) to heat than typical homes, reduced energy usage means decreased greenhouse gas emissions.

“I get claustrophobic in big houses if they’re poorly designed or too crowded,” said Jay Shafer, who started the Tumbleweed Tiny House Co. and helped Johnson build his little house after building his own 70-square-foot home in 1997. “But I don’t get claustrophobic in a small house as long as it’s well made, unless there are too many people inside.”

For others, the draw of tiny houses is far more practical. They can provide a housing alternative when there are no other options.Because they’re built to last and can be set on property later as a guest cottage, the houses, which start at $37,000, will appreciate in value, unlike a trailer.

It’s the anti-FEMA trailer.
Posted by Geoff Gove at 8:34 AM