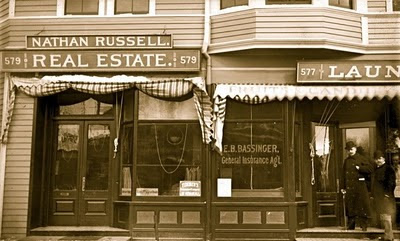 A century before the Multiple Listing Service and Realtor.com, the best way for a prospective home buyer to find out what was for sale was to walk into a Realtor's shop and see what he had to sell. If he was lucky,he could look at a single black and white print from a 5 x 8 glass plate negative.
Nathan Russell, a turn-of-the-century Realtor, photographed his listings from about 1890 until his death in 1917.  Many were newly constructed when he photographed them. When he died, the pictures remained in his house at 216 Ridgewood Avenue. The day before the demolition began for the new high school, Syd Wilson literally commandeered his good friend Tom Booth to rescue thousands of photos (annotated in Russell's hand) and 5" x 8" glass negatives, each weighing a quarter of a pound, a herculean task.The Russell Collection is now in the Glen Ridge Public Library.
His listing descriptions contain many selling points that are specific to his day:

"Stable,3 stalls hold 15 tons of hay, 90 bags of oats -- enough to keep 3 horses for one year, Barn on 2nd floor connected by shute to 1st floor...Butler's pantry. In 1904 10 tons of coal used to heat the house & 6 for range... stationary tubs in basement...stable for two horses and two carriages. 'Thatcher' furnace and range...cesspool connection, attic with manhole, chicken coop, trunk room,"

Rich Rockwell, a member of both the Bloomfield Zoning Board and the Historical Society of Bloomfield, has scanned and digitized many of them and put them on the Society's web site.   Many of the photos are indexed by street and house number, but there are nearly 200 that are unidentified. Anyone recognizing any of the photos can comment on them on the web site.  As more are identified, they will be added to the index.
Posted by Geoff Gove at 11:40 PM 1 comment: