The State of Volunteerism in NJ 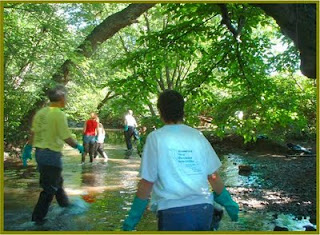 (photo: Bloomfield volunteers showed up in force for Third River cleanup near Clarks Pond)
A new report shows that more Americans are getting involved in their communities in multiple ways. In 2008 volunteering held steady while working with neighbors to solve community problems significantly increased over 2007.
As part of its mission to improve lives, strengthen communities,and foster civic engagement through volunteering and service, the Corporation for National and Community Service conducts research on the volunteering habits of Americans. The VolunteeringInAmerica.gov site houses the most comprehensive collection of information on volunteering and national service in the U.S. We looked at their key findings for New Jersey -- how do we rank compared to other states? Fogedabodet! (The only consolation os that New York ranks worst of all.)
For those interested in hooking up with a volunteer organization, the state has a nifty new website.
Posted by Geoff Gove at 8:25 AM No comments: 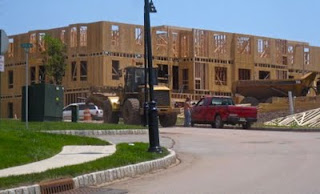 New home sales rose last month at the fastest clip in more than eight years as buyers eagerly took advantage of bargain prices — a clear sign, economists said, that the real estate market may finally be bouncing back.

While home prices are still falling around the country, sales have now risen for three months in a row. Construction of new homes is at the busiest level since last fall. And home resales rose in June for the third straight month.

"The worst of the housing recession," said David Resler, chief economist at Nomura Securities, "is now behind us."
Posted by Geoff Gove at 3:24 AM No comments:

One Stop Shopping for Homes? 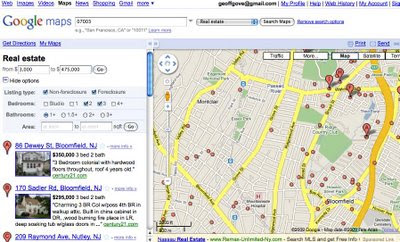 Google released their real estate search engine about a year ago but this month they took a huge leap toward becoming one of the web's most trafficked real estate search engines.
Many enhancementa have been to dramatically improve the entire site. They have added more markers on the page and also a more intuitive search interface. As usual, they've also published a detailed explanation of the improvements.
It's cool to view listings in Google's familiar "Maps" interface and see how many listings are available in your However, like Zillow and Trulia, Google Real Estate search is still limited by the data it receives. As with most Real Estate search engines, Google relies on "feeds" to get current listings, not on an MLS database. As a result the data can be flawed or out dated.
For the most up to date information, we still recommend checking multiple sources and not using just Google.
Posted by Geoff Gove at 8:21 AM 1 comment: 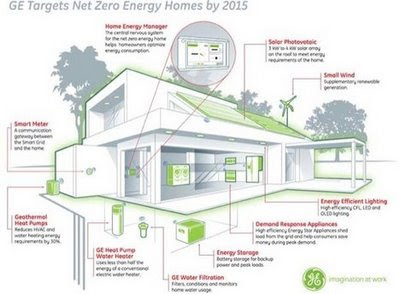 They call it the Net-Zero Energy home. It has ground source heat pumps (promising a 30% reduction in energy use), photovoltaic arrays, supplementary wind power, high efficiency appliances and battery storage, all talking to each other through a Home Energy Manager.
The folks at treehugger.com are a bit skeptical about the need for all the high tech "gizmos" in such designs, pointing out that " the net-zero energy house will cost 10% more than a conventional house. That's a lot of money; if people would pay that much for extra insulation and better windows they would probably save 30% of their energy costs without fancy heat pumps."
Posted by Geoff Gove at 11:56 PM No comments: 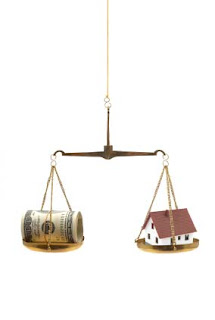 I'd like to think that my post last fall clarifying the tax appeal process helped one or two EcoRealty readers along the road to getting back a few tax dollars. In any case, the financial pressures faced by many of us are resulting in a huge increase in such appeals.
The NY Times reports that, as home prices fall, homeowners and associations are appealing to the local authorities to have their property taxes revised downwards.

In suburbs of New York, tax lawyers are so busy that they have hired extra employees to go through the paperwork related to property tax reassessments. "We've been absolutely getting killed," said Robert W. Singer, the mayor of Lakewood Township in New Jersey. Singer's town expects to pay $2 million in tax refunds to homeowners. "We've never had this before. Usually they're undervalued. Now, everyone's overvalued."

Posted by Geoff Gove at 1:12 PM No comments:

Prologue to Our Revolution 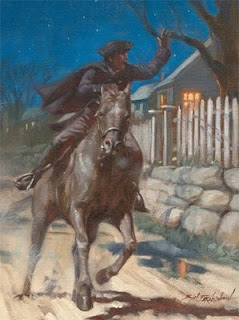 This is a day for reflecting on our country's roots in the human need for "life, liberty, and the pursuit of happiness." For my extended family, I can't help reflecting on my ancestors' little known contribution to the revolutionary fervor that culminated in the events of 1776:

"It is a singular and interesting fact that the first armed resistance to British oppression in the North took place in Hampton almost 100 years before the outbreak of the Revolution. In 1682, Charles II of England sent to New Hampshire as royal governor, Edward Cranfield, a most arbitrary and injudicious man. The ruling body at this time was the Assembly, made up of representatives of the four towns of Exeter, Hampton, Portsmouth and Dover, which ably managed the affairs of the little commonwealth. This Assembly refused to comply with Cranfield's commands and he dissolved it. One of the members was Edward Gove, of Hampton, a high-spirited and impulsive man, who resolved not to lightly submit to what he considered an infringement of the people's ancient prerogatives. Mounting his horse he rode through Exeter and Hampton with the cry: "Freemen, come out and stand for your liberties!" He gathered around him a little band of supporters. But before the movement could become formidable, Gove was surrounded by the militia in Hampton village and surrendered. He was tried, convicted of high treason, sentenced to be hanged, drawn and quartered. But this ferocious sentence was never carried out.

After several years commitment to the Tower of London, he was pardoned by the King and permitted to return to Hampton. Gove has been harshly treated by the historians. They have represented him as a rash and impulsive man who headed a hopeless rebellion against constituted authority. But there is another side. I like to think of Gove as a pioneer patriot, as a man in advance of his times, as the morning star of the American Revolution. Had Gove lived a century later, he would have been acclaimed as a great patriot, and his name would have been enrolled with those of Sam Adams, Josiah Quincy, Joseph Warren and John Sullivan."
Posted by Geoff Gove at 7:38 AM 2 comments:

The Pending Home Sales Index in the Northeast rose 3.1 percent to 80.9 in May and is 6.8 percent above a year ago. The last time there were 4 consecutive monthly gains was in October 2004.

In our Little Falls office, we're also seeing closings in May and June approaching the highest levels in recent years.
Posted by Geoff Gove at 7:05 AM No comments: