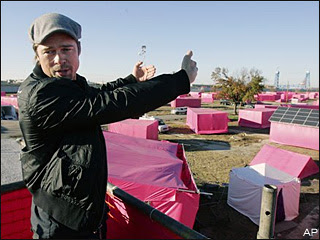 Combining philanthropy with a genuine love of innovative home design,
the actor's interest in architecture and love of New Orleans has led him to commission 13 firms to design 150 homes for areas devastated by Katrina, with restraints: 1,200-square-foot, flood-height-friendly homes for $150,000, and they have to be green, reducing upkeep costs by 75%. He promised that each model will match what residents want to see with what engineers need to provide to protect against climate change and future floods. “Our goal is to bring green technology to the affordable level and not have it look like a Prius,” Pitt said.
Posted by Geoff Gove at 9:02 PM No comments:

It has been on YouTube less than a week, but this scam warning has already drawn complaint from a YouTuber that "This is typical heavy handed democrat propaganda. Pure Bullspit! To portray a perfectly good pre-forclosure sale transaction as a scam..." Most viewers are defending Freddie Mac.
From Newsday online:
To reach out to homeowners in trouble, Freddie Mac has produced a two-minute video on how con artists can prey on delinquent borrowers.

Though it may not win any Oscars, the video shows how scammers can get copies of foreclosure notices at city hall or a county courthouse and then persuade borrowers to hand over their deeds in exchange for solving their financial problems. The con artists then use the deeds to secure new loans for themselves but let the new loan go into foreclosure, leaving the distressed homeowner out on the street.

Freddie Mac, one of the nation's largest investors in residential mortgages, took its message to the Web after conducting a survey that found one in four borrowers go to the Internet before their lender when they fall behind in their payments.
Posted by Geoff Gove at 10:35 PM No comments:

How Green is Your Candidate

Grist has become a leading contender to be The NY Times of Environmental Web Sites. [We've just had honor of previewing their soon to be revamped site in a usability study.] Since today marked the conclusion of the pre-Primary debate season it seems like a good time to compare the candidates' green positions using their handy chart.You can also watch videos of some of the candidates speaking at the first-ever presidential candidate forum focused on climate change and energy policy, co-sponsored by Grist.

Grist also teamed up with Outside to interview the candidatesabout green issues. They've published Q&As with all of the Democrats and a number of the Republicans.
Posted by Geoff Gove at 9:15 PM No comments:

Want to get away from it all?
If you can find a home more secluded than these, let us know!
Dream on!
Posted by Geoff Gove at 11:54 PM No comments:

If you're looking to downsize into an eco-friendly home, leave it to the Canadians to come up with an economical and stylish solution. Two years ago, they introduced the concept of the prefabricated MiniHome. Now the folks at Altius Architecture are expanding their living space with new production modelas of their DuoHome models(click on photo to enlarge) starting at 149K.

The new DUO model resolves this integration by marrying an ADD-ON room at the Loft portion of the SOLO, giving a full 12′ ceiling - and this gives us some very cool overlook spaces from the Loft!

Based in Toronto, they even provide their own financing plans.
Posted by Geoff Gove at 10:09 PM No comments: 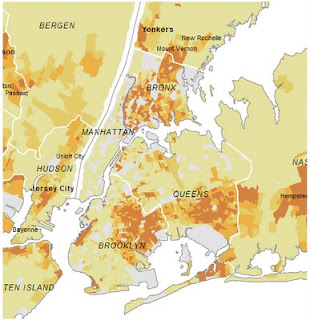 President Bush's latest attempt to ease financial pressures on subprime borrowers may be too little & too late for many NJ homeowners.

According to The Record:
Nine percent of more than 63,000 securitized adjustable rate subprime loans in the state were in foreclosure in August, according to the first-of-its kind report to track the condition of loans given to non-prime borrowers in New York and New Jersey.

Payments on only 67 percent of the loans -- which totaled $16.5 billion in outstanding balances -- were up-to-date.

"More than 30 percent in arrears is a striking number," said Keith Gumbinger, vice president of HSH Associates in Pompton Plains, a publisher of financial information.

According to the report, the typical subprime adjustable rate borrower in New Jersey borrowed $262,000 and started out paying an interest rate of 8.12 percent. But after the rate adjusts over time they would pay about 11.42 percent on average over the life of the loan, the report said.

Adjustable rate subprime loans are among the types of loans most likely to go bad because borrowers often have had trouble with debt in the past and because their monthly payments will rise over time. And in a real estate market where home prices are falling, it is often impossible for financially distressed borrowers to refinance or to sell at a price that would pay off the balance of the mortgage.
Posted by Geoff Gove at 7:18 PM No comments:

Under the Montclair State Passaic River Institute’s program, local high school teachers and students in New Jersey's Passaic River basin will study and monitor river-bottom plants and animals and test water quality in the Passaic River. Students will acquire the knowledge and critical thinking skills necessary to understand how rivers are affected by urbanization, industrialization and other causes of pollution. The new river stewards will learn what can be done to protect river water quality and how they can protect the river’s ecosystems. The project will include teacher training, field trips to learn about and conduct water monitoring, a hands-on environmental education program, and a project web site that will serve as an information clearinghouse and repository, resource center, and virtual meeting place.
Posted by Geoff Gove at 7:26 PM No comments: 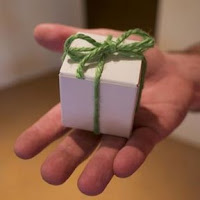 VickyandJen.com is a unique podcast and family resource site about making life simple so you can enjoy what really matters.

In this episode of The Big O: Organization, Organizing Expert Monica Ricci, Vicky and Jen discuss seven categories of gifts that have meaning for both the giver and the getter. Clutter-Free Gifts is wrapped with ideas to make gift giving more memorable and meaningful all year around, with no dusting required!
Posted by Geoff Gove at 10:45 PM No comments: