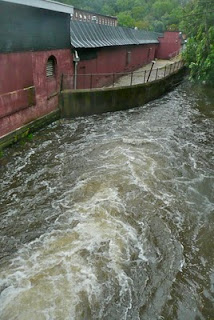 This weeks Bloomfield town council conference meeting saw several developments on a major new development. On the agenda was a discussion of issues related to planned mega conversion of Bloomfield's former National Starch Factory complex at 225 Belleville Ave -- across from Oakside Mansion Recently christened "Oakes Pond," the developer is projecting as many as 390 rental units.to replace a dozen "light manufacturing." facilities. The plan was moved into the Closed Session part of the meeting due to land acquisition and abatement issues that needed to addressed. In the public comment section of the meeting Trish Comstock spoke about traffic problems that already exist in the Belleville Ave. neighborhood. "During rush hours, traffic is frequently backed up (from Broad St.) to Woodland Road."
The current plan by Garden Commercial Properties is to create two buildings along the lower bend of the Third River, four stories each with a parking deck beneath, to serve as luxury one- or two-bedroom apartments. The developer, has said that the properties could begin as rental units and potentially become condominiums. when the real estate market improves.

Commenting on the news of a $100,000 grant received for studying the causes and cures of flooding along Bloomfield's segment of the Third River, Councilman Nick Joanow asserted that "You don't build on a floodplain. There's a cost/benefit analysis that needs to be understood …. Homes along that river have lost 5 to 10 feet of their property due to riverbank erosion. There are homes that are consistently flooding…the water has to go somewhere." He referenced the township's 2002 Master Plan which included the Army Corps of Engineers conclusion that
"The increase in the intensity and number of 100 year and 500 year flood events can be attributed to the way that development has occurred in Bloomfield. Impervious surface coverage along stream corridors in wetlands and floodplain areas leaves stormwater with no place to go. Generally these areas would absorb and filter the waters acting as a natural detention basin for the surrounding community. In Bloomfield, storm water travels through streets, driveways, and sometimes basements, rather than vegetated riparian corridors and wetlands."

Councilman Robert Ruane asserted that arguments on flooding issues caused by development plans along the Third Rive were a diversion for the "fact that the river is full of debris and it has never been cleaned up or dredged." River liaison Bernard Hamilton refuted Ruane by stating that he has personally been involved with several river cleanups. The Mayor concurred with Hamilton.
Posted by Geoff Gove at 6:20 PM 1 comment:

Most legislators posture themselves as being green, but Environment New Jersey, a state-wide citizen-based advocacy group, decided to find out just who was walking the environmental walk -- and who wasn't. In a recently released "scorecard," each member of the state's 213th legislature received a grade from ENJ. "It's important for voters to know where their elected officials stand on the environment. We want to make it easier for them to decide how much the green rhetoric of legislators is matched by their voting record," explained Doug O'Malley, the organization's field director.

The good news from O'Malley is that our local legislators scored pretty well.
While none of them hit the 100% mark (maybe next year?), all but one ranked above average; Senator Kevin O'Toole, (R ), scored a failing 50% in both 2009 an 2010.
Snaps go to our political green champs -- especially the two top scorers -- Ronald Rice and John McKeon. Keep up the good work, fellas.

The bad news: The average score for both the State Senate and the State Assembly took a big dip from 70% and 75% respectively to 55%. O'Malley, noted that "this drop reflects an increase in attempts - some successful - to rollback existing environmental protections." He adds that despite this decline in green performance, "there were some stand-outs who were willing to defend the environment time and again, who scored 100% on the scorecard; Asm. Peter Barnes (18), Asw. Linda Greenstein (14), Sen. Bob Smith (17) and Sen. Shirley Turner (15)." Another significant factor in the downward trend are 4 Republican Assembly members -- Asw. Allison Littell McHose (24), Asm. Gary Chiusano (24), Asm. Jay Webber (26) and now retired Asm. Rick Merkt (25), who scored big zeros, bringing the average down considerably.

No scores here for Governor Christie, although he has undertaken several actions that are seen as a step backward by other environmental groups.
Posted by Geoff Gove at 8:49 AM No comments: