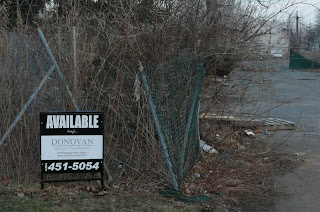 The latest development in our neighborhood's two-decade long effort to prevent a massive townhouse development on Liongate's flood prone Scientific Glass site is: No Development.

The site’s current owner, Arthur Fefferman, reportedly purchased the property in 2003 for 3M. The 104 town houses (scaled back from 124 in the original developer's plans) were to offer 1,500 to 2,200 square feet of "luxury" living for about 700k & up. Meanwhile, comparable townhouses near the center of town are now having open houses for units asking 350K.
An agent from Donovan Realty told me that the asking price for the 12.7 acre property is 13 Million. They also said they have no plans to list it on a NJ MLS. I did a GSMLS(Garden State Multiple Listing Service) search for comparable development spaces on NNJ. Nothing under 7M You'll find many larger CLEAN lots here for a lot less $$. Could it be that they're not listing on the MLS because they can't compete in that market?

Fefferman and the original Scientific Glass owner,are thought to have spent over$100,000 to remediate the former industrial site, but were unable to get it clean enough to received a final NFA(No Further Action) letter from the DEP. This realization -- along with the falling market for new construction -- may have shut him down. A member of The Bloomfield Third RiverBank Association wonders if "the DEP might require continuous monitoring. By whom? And who is going to oversee and enforce this monitoring, the condo association?"
Posted by Geoff Gove at 4:21 PM 2 comments:

The National Association of Home Builders (NAHB) has launched a newly-designed web site that provides detailed information about the $8,000 tax credit for first-time home buyers that is a key measure in the sweeping economic stimulus legislation just signed into law by President Obama. Homebuyers can find other helpful resources on the site.

In addition to being limited to first-time home buyers, the tax credit:

Does not have to be repaid.

Brendan Byrne, the cover model of this month's Inside Jersey's Green Edition, has one of the best environmentalist records of any Jersey governor. He recently reflected on his legacy. (Video by Jennifer Weiss)

Building Solutions That LEED the Way

Green Depot is this country's leading supplier of environmentally friendly and sustainable building products, services and solutions. Founded in 2005, Its primary goal is to facilitate green living and LEED friendly building in communities so that it is accessible(you can even find them in Facebook), affordable and gratifying. Green Depot has showrooms in Newark, Brooklyn, Philadelphia, Boston, Greenport, Chicago, Albany (2009) and Newark, DE (2009), a new flagship retail location in Manhattan, and 10 additional distribution centers spanning the Northeast.
Posted by Geoff Gove at 7:49 PM No comments: 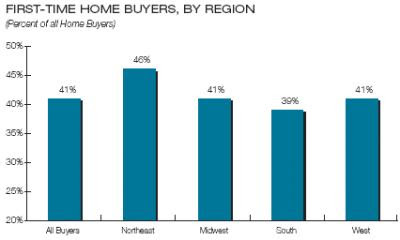 source: NAR 2008 Profile of Home Buyers and Sellers
In the years of rising prices and quick sales, first-time home buyers made up a smaller share of the market. As affordability improves but sales slow, it is more difficult for current homeowners to sell their homes.

Unencumbered first time buyers are therefore a larger share of purchasers, now 46% in the Northeast.
Posted by Geoff Gove at 11:14 PM 1 comment:

Solar is Coming to a Corner Near You 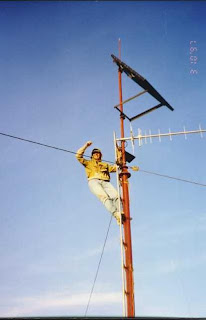 Public Service Electric and Gas Company today asked state regulators to approve a $773-million proposal to bring 120 megawatts of solar power directly to communities and customers throughout its service territory.

PSE&G proposed a comprehensive program that includes the largest pole-attached solar installation in the country. It calls for the installation of solar panels on 200,000 utility poles as well as schools, municipal buildings, low-income housing and brownfield sites. In a statement, PSE&G said it would invest in, own and operate the grid-connected solar energy systems while collaborating with experienced solar developers, installers and manufacturers to develop projects.

“We designed our program to ensure that everyone has access to the benefits of solar energy,” said Ralph LaRossa, PSE&G’s president and chief operating officer. Speculation about the company's other possible motives can be found here.

Newark-based PSE&G is New Jersey’s largest utility with 2.1 million electric customers.
Posted by Geoff Gove at 11:14 AM No comments:

How They're Recalculating Your FICO Score 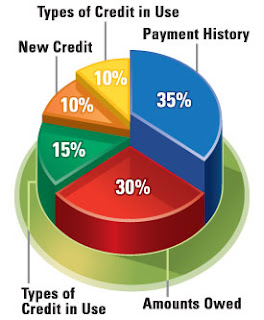 This might be a good time to update your credit reports. Fair Isaac, the developer of FICO scores, has made the biggest change to its mathematical credit score model since it was introduced in 1989. Scores will still be on a 300- to 850-point scale. But the company estimates that 40% to 50% of borrowers’ scores could go up or down by more than 20 points. Depending on your situation, you may get some good news -- or not.
The chart above is not up to date but will give you an idea of the key components. Some interesting consumer reactions can be found here.
Posted by Geoff Gove at 8:04 AM No comments: 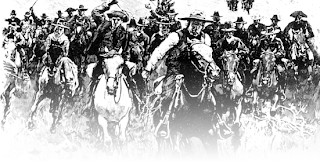 The US Senate on Wednesday unanimously approved a proposal that would give a significant tax break to anybody who buys a house by the end of the year. (The Stimulus Plan is expected to pass within a few days.)

Assuming the tax break is approved, it will do away with the first-time homebuyer stipulation, the Atlanta Journal Constitution reports, allowing anyone who purchases a primary residence to claim the tax credit with no payback requirement.

It's gotta be tough being a ground hog in NYC. Aside from Staten Island Chuck, you just can't dig anywhere without hitting something hard. New Yorkers go about unaware of what is happening just beneath their feet: Power pulses, information flies, and steam flows. The city’s infrastructure starts just below street level, but it doesn’t stop there. Thanks to nationalgeographic.com. Click on picture to enlarge. Click here to see the true scale of cross section.
Posted by Geoff Gove at 1:49 PM No comments: