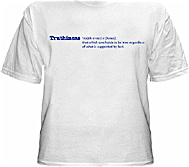 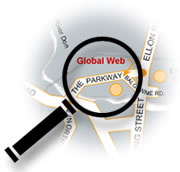 Fair Housing & anti- "steering" codes prevent all Realtors from passing judgment on any given neighborhood, town, or school district. We advise buyers to drive around any area of interest and then go online and research. One of the best full spectrum sites is Sperling's "Best Places". They boast that "Our neighborhood profiles contains almost 100 pieces of data on every zip code in the United States." Check it out.
Posted by Geoff Gove at 8:47 PM No comments:

A Christmas Gift for Liongate 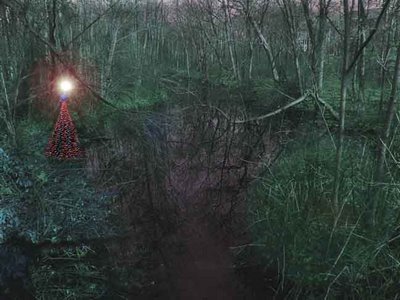 Yet another reason for celebration in Bloomfield:
Fefferman/AFC Fairways, a deep pockets NY Developer, has just withdrawn its DEP application to add 114 townhouses to this property. This could signal the end of the community's six year battle to forestall developers on Liongate Drive. Full details on The Bloomfield Third Riverbank blogsite.
Posted by Geoff Gove at 8:55 AM No comments:

Council Coup for Christmas in Bloomfield 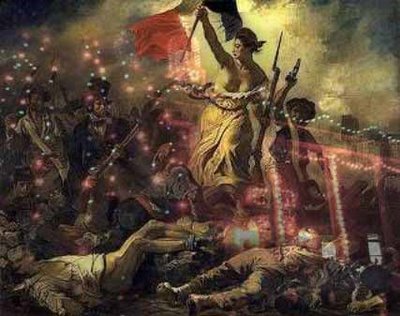 You don't have to go to Thailand, Fiji, or a banana republic to see coups and insurrections. Bloomfield's normally staid council conference meetings have recently been the scene of several occasions of closed door maneuvers by his fellow Democrats that have left two term Mayor Ray McCarthy with less and less influence. From last summer's firing of Vincent Pirone, the town attorney for decades,to, this week, sacking equally long term Zoning chief, John Lazar. According to the council's lone Republican, Ray Tamborini,"
“They have, in essence, rendered the mayor completely ineffective.”

from My Community Life/Bloomfield Life:
Posted by Geoff Gove at 3:09 PM 1 comment:

Check Up Time for Green Challenge

Over the last eight weeks, 30,033 (and counting) Green Challenge participants have pledged to shed 58,678,436 pounds of carbon dioxide, the equivalent of taking 5,998 cars off the road for a year. Now comes the moment of truth: How many of your pledges have you fulfilled? Did you really cut beef from your diet, inflate your car tires, turn down your thermostat, and take the train instead of flying? The Green Challenge wrap-up quiz asks you to revisit your pledges. Will we meet our goal of a 20 percent reduction in collective carbon emissions? Only you can help us find out! Learn about The Slate Green Challenge here, or go straight to the Slate Green Challenge Wrap Up Quiz.
Posted by Geoff Gove at 11:53 PM No comments:

The Buck Stops at Schoor 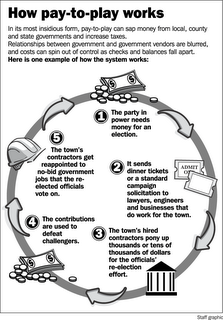 The founder of a prominent engineering firm that has become one of the state's biggest government contractors was indicted by a federal grand jury on corruption charges yesterday.

The charges against Howard Schoor, 67, of Colts Neck stem from a long-running federal investigation into corruption in Monmouth County that has snared two dozen public officials.

he firm Schoor founded in 1968, Schoor DePalma, has been involved in high-profile projects in the public and private sector and has showered New Jersey politicians with millions of dollars in campaign cash over the years. The firm's engineers have been involved with everything from the Asbury Park waterfront redevelopment to Jersey Gardens mall and the Turnpike's Interchange 13A.

Schoor DePalma, based in Manalapan, is a household name in New Jersey politics. As governments around the state have debated a crackdown on pay-to-play, the practice of contributing campaign cash to help win public contracts, the engineering firm has often been cited as a prime player in the system.

The firm and its employees have donated nearly $3 million to New Jersey politicians and political parties at the state and county levels over the past quarter-century, mostly to Democrats. It ceased giving donations last August amid criticism of pay-to-play and the corruption investigation. 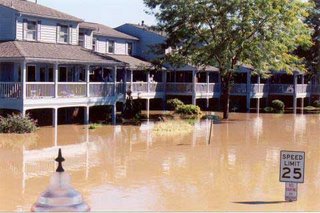 Just when you thought they couldn't possibly squeeze any more riverside condo developments into the mix, our ace council observer for The Bloomfield Third RiverBank Association, first broke this story to her email list:

Well, Ralph Salerno was back in front of the council
last night promoting the latest housing nightmare for
Bloomfield.

This time a developer wants to rezone the area of
National Starch (off Belleville Ave..across the river
from memorial field) to a garden apartment zone...but
instead of making low rise garden apartments, he
wants 4-story buildings... enough for 300 units
(Condos).

Several pitches included expanding the permeable
surface. There was a square on the plan that said
recreation center. Repeated questions were
mysteriously avoided by Salerno who said, for legal
reasons, this couldn't be discussed. So I guess they
are dangling a new recreation center in exchange for
high density on a flood plain? ... they were also dangling
age-restricted housing units. They were also somehow claiming the
traffic from these units would be less than the truck
traffic tying up Belleville Avenue currently. Or at
least I think that was what they were saying. And they
were saying this would bring another $3 million
dollars to Bloomfield's pocket book.

The council is sending a request to the planning board
to consider rezoning the property.

More info can be found in this week's Bloomfield Independent Press.
Posted by Geoff Gove at 2:05 PM No comments:

Below are links to the WeirdNJ article in the current (October 2006) issue -- via The Third Riverbank blog site. Included are historical photos and personal memories of the magazine's editor, Mark Sceurman, growing up next to the Scientific Glass site.

As to the significance of the mysterious letters on the Clark's Thread tower, you will find it in Mark's article.

For best results with these pdfs, you may need to copy, paste, & rotate.

To send letters to the magazine, use the e-mail address below. If enough letters come in riffing on SGA, the editor will continue to write about the subject. You can also check out their interactive message forum.

editor@wierdnj.com
Posted by Geoff Gove at 6:55 PM No comments:

From PiggyBack Mortgages to Holiday lights

Some homebuyers used these mortgages, which stack a smaller second home loan on top of a primary mortgage, to buy their homes during the recent housing boom. The Real Estate Journal.com's Terri Cullen explains when it does, and doesn't, make sense to refinance a piggyback mortgage. (This is one of those rare Wall Street Journal sites that doesn't require a paid subscription --so it's a link worth bookmarking.)
Scroll to the bottom of her column for a light hearted discussion on the reasons why women seem to prefer white holiday plug-ins while men like theirs multi-colored. 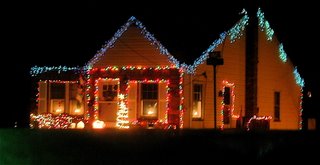 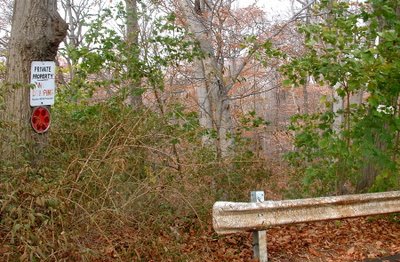 The state Supreme Court today granted its approval to what has been called a new weapon for towns fighting development.

In a 6-1 ruling, the court said that towns have a statutory right to use eminent domain to condemn properties for open space.

In the name of eminent domain, Mount Laurel took land a builder was going to use for a 23-house project. The town said it wanted to preserve the 16 acres - one of the few undeveloped properties in town. Last year, a state appeals court ruled the town acted properly.

The majority tempered its decision, saying the developer should be paid the property's fair maket value....

The case has been followed by critics of last year's controversial ruling by the U.S. Supreme Court that allowed local governments wide latitude to condemn and knock down homes and businesses to foster private economic development.

Visit judiciary.state.nj.us to read the decision.
Posted by Geoff Gove at 5:32 PM No comments: 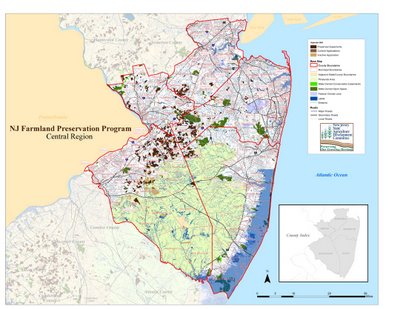 Move too slowly to buy a house and a competing buyer may grab it, even in this cooling real estate market. The same is true of farmland in the nation's most densely populated state.

State officials -- who have already spent a half-billion dollars preserving farms -- have come to realize this and have proposed new rules to help shorten the time the state can get checks to farmers. Instead of considering only once a year which farms to purchase, officials are considering looking at farms continuously through the year.

"Absolutely, the biggest complaint about the program statewide is the time it takes, particularly when a landowner is working with the county," said Susan Craft, executive director of the State Agriculture Development Committee.

The organizational shift comes just in time as the state has seen more than a three-fold increase in farms preserved annually over the past decade, officials said. By buy ing farm tracts outright and purchasing easements to prevent development, the state has saved some 1,440 farms comprising upwards of 150,000 acres to ensure agriculture stays viable in the Garden State.

"(Farmers) have been a year into the cycle, and then Toll Brothers or K. Hovnanian shows up and offers them more money," Traylor said.

Morris County Preservation Trust Director Frank Pinto called the rule changes "the most significant in the 23 years" of the state- led program. He said the "revolving door" system will give him increased credibility with farmers who want to close quickly.
Posted by Geoff Gove at 1:37 PM No comments: 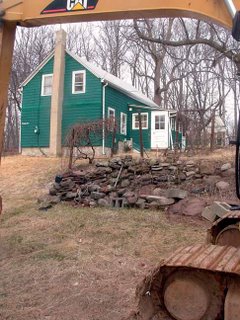 When it was first put on the market 2 years ago, 24 Oak Tree lane was described as an historic Bloomfield farmhouse and family homestead. c.1840
...first time on market...corner property/oversized lot... possible subdivision.... Sold 'AS IS'. Buyer resp. for CO. Oil tank in basement. The asking price was $310,000.

Today, it's being presented as 32 Oak Tree Lane..."Vacant Land" ("Offered with all approved permits and architectural plans. Green Building will be removed and land cleared of debris.") The asking price is $329,000.

A small price for a 19th Century history lesson. It also happens to face the only "footprint" for the historic Morris Canal. 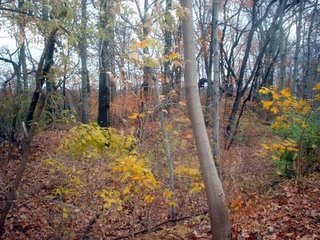 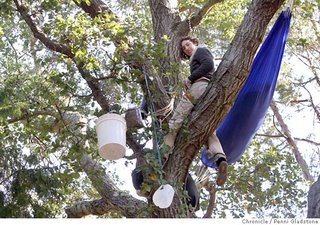 NJ environ-mentalists have waged many successful battles to preseve old-growth trees. They may find inspiration from these folks in Berkeley:

Save the Oaks activists are up in the trees at Cal's Memorial Stadium to protest the plans to remove oak and redwood there.

It may be a bit drafty, but life is pretty good 40 feet above Berkeley.
"You can see the bay and the city lights," said Kingman Lim, a recent UC Berkeley graduate who is among five or so activists who've taken up residence in two coast live oaks and a redwood next to Memorial Stadium.

Three days after they began their leafy sit-in, activists with Save the Oaks were busy chatting with reporters via cell phones, shouting to the festive encampment below and affirming their vow not to come down unless UC scraps plans to replace the trees with a $125 million athletic training center.

"It's exhilarating," said the group's leader, Zachary RunningWolf, a contractor and former Berkeley mayoral candidate, who's now swinging in a hammock in a redwood tree. "It's such a powerful form of protest."

The UC Regents' buildings and grounds subcommittee is scheduled to vote today on the training center plan, which calls for the removal, as early as next month, of 42 oaks, redwoods and other trees next to the stadium.

Among those drawn to the encampment Monday was folk singer Country Joe McDonald, a Berkeley resident who brought Cheez-Its, peanuts and apples for the arboreal activists.

"I've pretty much made up my mind to hug a tree if they try to chop one down," said McDonald. "I'm not going to climb one, though. I don't want to fall like Keith Richards."

The group has grown from three tree-sitters, each perched in a separate tree, to about five sharing quarters and a dozen more below who deliver food and remove waste.
Posted by Geoff Gove at 8:13 PM No comments: