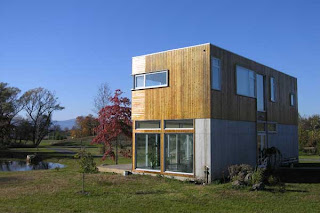 
John Brown is the editor of theslowhome.com and the founder of the Slow Home movement. He is a registered architect and a Professor of Architecture at the University of Calgary.
Slow Homes is an international movement devoted to bringing good design into real life. It takes its name from the slow food movement which arose as a reaction to the processed food industry. Browns belief is that "the sprawl of cookie cutter housing that surrounds us is like fast food - standardized, homogenous, and wasteful. It contributes to a too fast life that is bad for us, our cities, and the environment. In the same way that slow food raises awareness of the food we eat and how these choices affect our lives, Slow Home provides design focused information to empower each of us to take more control of our homes and improve the quality of where and how we live."
Posted by Geoff Gove at 8:32 PM No comments:

Power on a Shoestring 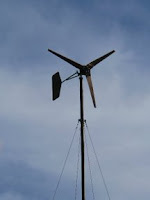 Looking for money saving energy sources that are less expensive than solar?
The folks at OtherPower.com can provide you with your own wind turbine kit for as little as $1800. They also market a wide range of low tech energy sources. "All of our houses and shops run on only solar, wind, water and generator power...not because we are trying to make some sort of political or environmental statement, but because these are the only options available. And we refuse to move to town."
Posted by Geoff Gove at 10:13 PM No comments: 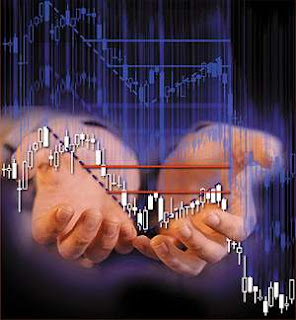 From The Star Ledger:

"This is an unbelievable buying opportunity," Jennings said. "This is the first time in recent history you have near-historic-low mortgage rates at a time home prices are falling in New Jersey."

Rates have come down as New Jersey's inventory of existing homes for sale is growing and, for the first time in years, property values in some areas of the state are falling.
Posted by Geoff Gove at 10:46 AM No comments: 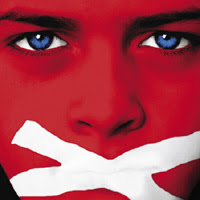 Let the puns flow freely!
There are more than enough ruffled feathers to go around.
(We couldn't resist)
From The Star Ledger:

SGA President Ron Chicken halted publication of this week's edition of the college's Montclarion student newspaper in a dispute over the hiring of an attorney to advise the newspaper on issues that include coverage of the SGA's practice of holding closed meetings to discuss campus matters.

"We're enraged," Montclarion news editor Shayna Jacobs said of Chicken's decision to halt publication.
"I'm completely shocked that he would go to these measures," she said. "We feel violated as student journalists. I think they're bullying us."

The center's legal consultant, Michael Hiestand, said suspension of the newspaper's publication, is a blatant violation of its constitutional rights.
"It's very unusual," he said. "It's unusual not just because it doesn't happen very often, but because it's illegal. It's a complete violation of the First Amendment."

Hiestand said the SPLC receives just one or two complaints a year of student newspaper suspensions or threatened shut downs.
"Usually once you remind them of what the law is, the situation resolves itself very quickly," he said.

He said SGA President Chicken is ignoring the advice of Montclair State officials in the dispute.
Posted by Geoff Gove at 1:06 PM No comments: 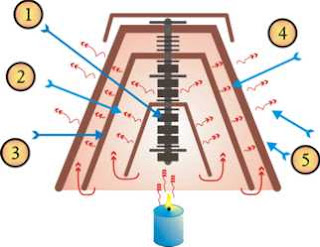 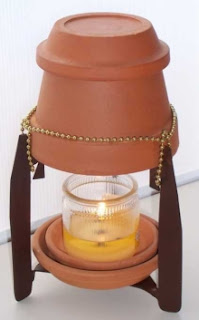 This may not solve all your heating needs when the temps get down to the teens, but it's the cheapest low tech device we've seen to take the bite off this cold snap. From greenbuilding elements.com comes The Kandle Heeter Candle Holder

The aecret is the the terracotta pot topping the candle with a multi-core radiator, where the inner steel core can be driven to very high temperatures — 500-550 degrees Fahrenheit — by the burning candle flame and becomes a central radiating body. ityields an efficient 50BTUs an hour for an total of 1000 BTUs to cut the chill,
The ceramic — a high ‘thermal lag’ material — absorbs the heat rising from the candle, as it is dense and heavy with tile, concrete, water, thus, storing heat well. The pots actually concentrate the heat, and can focus on to where you need it to heat up. A 3-inch diameter by 3-inch dollar candle can get you about two days of heating, which amounts to 0.50/day! And if the winter days turn out to be wet, cold, it would cost you about $50 for a whole heating season.
Now, you can purchase this little energy saving candle-transformed radiator and considerably cut on to your heating bills. Giving the ambiance of a miniature “fireplace”, it will keep the cold out and coziness in. Normal fire precautions apply although a light bulb can be substistuted if the flame makes you nervous.
Posted by Geoff Gove at 9:51 PM 2 comments:

Catching Up At Home 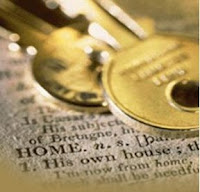 If you're a homeowner who's falling behind on your mortgage payments, please -- ACT NOW! Here's what Fannie Mae recommends:
Call your lender or loan servicer today. The telephone number is listed on your mortgage bill and on the year-end tax statement you receive from your lender.

If you take action now, you improve your chances of working out your situation with your mortgage lender or loan servicer. For example, depending on your situation, you may be able to incorporate missed or late payments into future payments, re-work the terms of your loan, or refinance into a different loan with payments you can more readily handle. The important thing is to take action immediately.

Many homeowners are struggling to keep up with their payments, especially those with adjustable-rate loans that reset to a higher rate and those whose job or family situation has changed. Free information and counseling are available to help you.

Call the Homeownership Preservation Foundation at 1-888-995-HOPE to talk with an experienced counselor or visit the Foundation website at www.995hope.org.
Posted by Geoff Gove at 11:24 PM No comments: 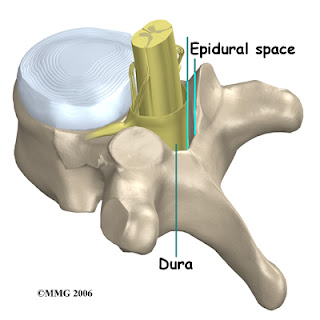 Watch your back!
I wish I could have watched mine.
Longest I’ve been offline since entering the cyberworld in late 90’s.
Staphacoccus Virens is not the rarest bug in the world. It drifts around the mouth and skin of most of us. It’s only when gets into the bloodstream that the fun begins. It seems to enjoy messing with your spine. In describing this Epedural Abscess, Back surgeon, Mark Drzala, kept reminding me that I won the lottery by catching one of the most common bugs in one of the trickiest areas to access, but surgically removed in time(on New Years Eve) to avoid significant bone loss.

Warmest gratitude and thanks to Madison’s A-1 EMT Mensch Eddie Schmeltz and many of the best Bloomfielder buddies anyone could wish for: Nick Joanow, Mary Shaughnessy, Paul Schneider. and, most of all, Rebecca Shaw
Posted by Geoff Gove at 9:27 PM No comments: 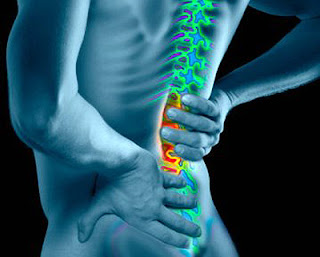