How Solar Leasing Can Put Free Solar Panels on Your Roof


In the 4 years since we've started this blog, we've covered several exciting developments in solar technology that have made it more efficient and accessible to homeowners. Yesterday, at Essex County's Earth Day fair we checked out Milburn based Geoscape Solar's intriguing new concept. It's goal is to dramatically expand solar's accessibility and affordability to millions of homeowners. Geoscape Solar’s new leasing program requires no upfront payment - consumers only pay a monthly fee that is lower than the utility cost of the electricity produced by the solar system. The leasing program was created offer homeowners an affordable way to go solar, save money and make a positive impact on the environment. At the Earth Day exhibit, I keyed in my home address and saw my rooftop clearly displayed on Geoscape's computer screen. Calculating the size, pitch and exposure of our roof, our home may be worth considering for a lease arrangement. The catch? Geoscape gets the profits from selling your solar energy back to PSE&G. In return you save 25% off your electricity bills.

Solar energy systems are an investment in one’s home or business – one that provides immediate and ongoing benefits in energy savings and cash income, creating a better environment for families and communities. The company estimates that an average system will save homeowners more than $10,000 over the 15-year lease period. Studies show that the value of your home increases $20 for every $1 per year saved on electricity. Panels will actually extend the life of a roof since they protect it from the elements.
Posted by Geoff Gove at 11:46 PM 13 comments: 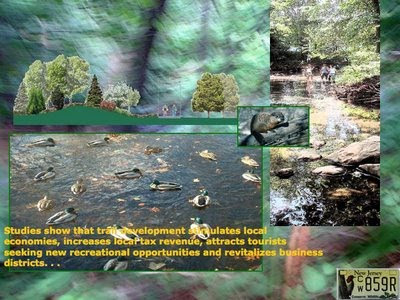 Perfect weather to meet your neighbors and help make Bloomfield's Jewel on The Third River sparkle. More info on our Greenway Blog.
Posted by Geoff Gove at 7:51 AM No comments:

Keeping Up and Down With FEMA 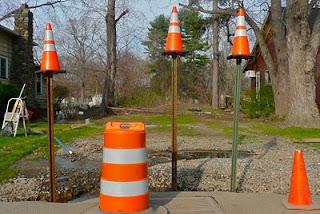 Living in a Federally declared disaster zone can have benefits that extend beyond those directly affected by the recent flooding. Taxpayers who live or operate businesses in counties designated as federal disaster areas will have certain IRS deadlines postponed until May 11, including the April 15 deadline for filing individual income tax returns, making income tax payments and making 2009 contributions to an individual retirement account. In New Jersey, Atlantic, Bergen, Cape May, Essex, Gloucester, Mercer, Middlesex, Monmouth, Morris, Passaic, Somerset and Union counties were declared federal disaster areas.

On the other hand,home buyers and sellers trying to close a home sale thugs month are facing unexpected hurdles. FEMA has informed mortgage company servicers that "Any appraisal with an inspection date of 3/29 or prior will require re-inspection by the original appraiser and contain the following wording: "...I certify that the inspection revealed no physical damage to the property OR neighborhood…"
If that weren't frustrating enough, all properties under contract in Flood Areas still require flood insurance that can't be bought until Congress extends that provision in yet another bill that was delayed until after their Easter Break.
Posted by Geoff Gove at 8:33 PM No comments:

In Case You Were Looking for Good News ... 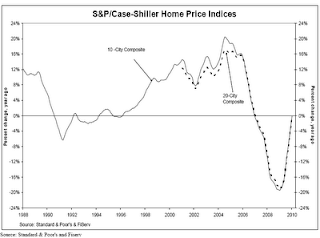 ...Standard and Poors Case-Shiller reports that their home price index is improving comparing January 2010 to December 2009. S&P reports that their ten city composite is almost unchanged from where it was 12 months ago (which is a heck of a lot better than a decline). Home prices are trending up in most cities despite a national average 2.5% dip.
On the other hand, it also revealed the sobering fact that 25% of home loan holders are under water. No fooling.
Posted by Geoff Gove at 11:56 PM No comments: