Rethinking the Market for New Condos 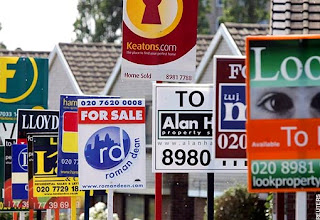 Town officials can't rely on these builders' reports that things are unsound. They should be crossed checked. Secondly, most builder's realize the townhouse market is stone cold, why even go that route? The big developers have cut back on the townhouse developments, some have even tried to sell their proposed townhouse developments to other builders. Traditionally Townhouses developments were marketed for people who downsized to a less expensive property as well as a lower tax bill, or someone who didn't want to handle the maintenance. In today's present real estate market it's not practical from a financial sense for a buyer to purchase these types of units as taxes are just as high as local housing, if not more in some local towns. It does not make sense from a practical point other than the builder maximizing their profit and the town acquiring more ratables. 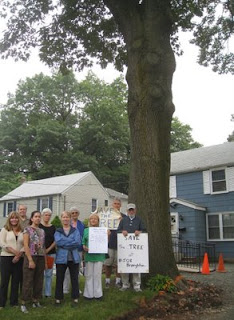 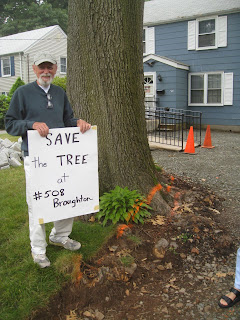 Howard Falk is the co-founder and president of Bloomfield and Montclair's newest and largest environmentally conscious Brookdale Park Conservancy. Although Falk lives literally a twig's throw from the park, he can hardly be characterized as a NYMBY type since he also founded the 5 1/2 year old anti-war Bloomfield Peace Vigil. When his Broughton St. neighbor, Jane Calif, sounded the alert regarding the imminent destruction of one of the neighborhood's oldest trees for the expansion of a driveway, Falk was one of the first on the scene joining 8 other neighbors in a vigil that has temporarily led the tree whackers to postpone the deed.
Posted by Geoff Gove at 2:41 PM 1 comment: 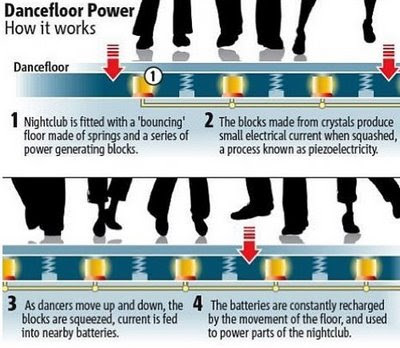 According to Environmental Graffiti:
A nightclub opening early next month in England is going to save the future — but only if you boogie as hard as you can on their energy-absorbing dance floor. The floor is made from a flexible material that bends as people pound it with their dancing feet. As you can see in this image, the dancing squashes special blocks under the floor that convert motion into into energy that powers the club's lighting and sound system. So maybe Emma Goldman was right about how revolutions should always include dancing?

You can get in for free if you can prove you walked or bicycled to the club. Otherwise it's 20 bucks.
Posted by Geoff Gove at 12:58 AM No comments:

"Sinkholes Can Be Human Induced"

Can the Ghosts of Scientific Glass be blamed?
From the USGS website:

Sinkholes are common where the rock below the land surface is limestone, carbonate rock, salt beds, or rocks that can naturally be dissolved by ground water circulating through them. As the rock dissolves, spaces and caverns develop underground. Sinkholes are dramatic because the land usually stays intact for a while until the underground spaces just get too big. If there is not enough support for the land above the spaces then a sudden collapse of the land surface can occur. These collapses can be small, as this picture shows, or they can be huge and can occur where a house or road is on top.

Sinkholes can be human-induced

New sinkholes have been correlated to land-use practices, especially from ground-water pumping and from construction and development practices. Sinkholes can also form when natural water-drainage patterns are changed and new water-diversion systems are developed. Some sinkholes form when the land surface is changed, such as when industrial and runoff-storage ponds are created. The substantial weight of the new material can trigger an underground collapse of supporting material, thus causing a sinkhole.

The overburden sediments that cover buried cavities in the aquifer systems are delicately balanced by ground-water fluid pressure. The water below ground is actually helping to keep the surface soil in place. [click on graphic to enlarge]
Posted by Geoff Gove at 7:24 AM No comments:

When we last heard Arthur Fefferman describe his plans for a November 2007 groundbreaking of “Fairways at Brookdale”, the first block of the 104 townhouse development was expected to be well under construction by now. At prices in the 800k range Mayor Raymond McCarthy spoke glowingly of new tax revenues for the township. Sometime last fall, a resident of the adjacent Greenbrook Townhouses happened to be watching a ditchdigger clearing a section of the property when it began to disappear an a pile of soggy muck. The digger and it’s operator were quickly pulled out and the site was roped off with red tape.
That was 8 months ago and there has been no noticable activity on the site since -- except for the slow silent expansion of Bloomfield’s newest lake. It appears to be about 30 feet wide by 80 feet long and about 10 feet deep—big enough to swallow one of the larger two families on neighboring Lakewood Terrace. Even closer are the townhouses of the Greenbrook complex -- about 50 feet from the edge of the hole.[click on picture to enlarge]
Posted by Geoff Gove at 11:59 PM No comments: 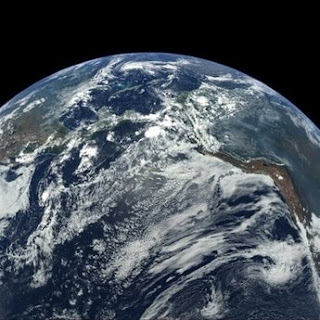 Brought to you by the magic of Google Earth/Maps and the UN: the United Nations Environmental Program's (UNEP) stunning world atlas of the changing environment. The interactive atlas allows you to toggle through a dizzying array of satellite images and ground photos showing the impacts of anthropogenic activities and climate change on the global environment over the last 3 decades.

The Google Maps interface is very intuitive and lets you zero in on specific cities, countries, natural monuments and geological formations (among others).
Posted by Geoff Gove at 12:03 AM No comments:

Tonight's big storm seemed like a metaphor for the recent turning of a corner in the real estate market. From the Star Ledger:

Could the tide finally be turning?
Two new snapshots of the New Jersey housing market seem to suggest the worst of the decline may be over.

A report by East Brunswick-based research firm Otteau Valuation Group shows April home sales increased from the March level -- the first time that has happened since 2005 -- in what may be a sign market has bottomed out.

At the same time, a report released by the Mortgage Bankers Association yesterday showed although home foreclosures and late payments continued to set records across the country during the first three months of the year, fewer New Jerseyans were falling behind on their mortgages and losing their homes. "There are a growing number of indicators which suggest the housing market is no longer worsening," said Jeffrey Otteau, president of the Otteau Valuation Group.

In April, New Jersey sales contract activity grew for the fourth consecutive month, and recorded a 9.3 percent jump above the March level, Otteau said. By comparison, sales activity declined from March to April in both 2006 and 2007, he said.

Another positive development: The pile of unsold homes for sale is not rising as fast as it once was.
Posted by Geoff Gove at 11:38 PM No comments: 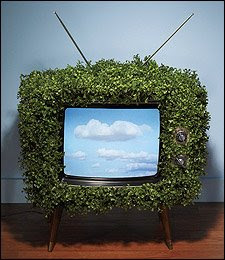 Last night marked the screen debut of Planet Green TV, the first and only 24-hour eco-lifestyle television network. Now you can enjoy the freshest, ecoist shows on TV. From gear to gourmet, renovation to innovation, find out what's cool, what's hot and what's next. For more ways to make your world more beautiful, watch Planet Green. It can be found locally on Comcast(113), Fios(144), and satellite. For those like me still using rabbit ear antennas, video clips can be streamed here.
Posted by Geoff Gove at 6:24 AM No comments:

Owners Sharon and Ray Sinclair, tried selling their upscale home in Yachats, Oregon for over ahttp://www.blogger.com/img/gl.link.gif year and a half with no success. They tried the conventional methods of listing with realtors, listing on the Internet, FSBO (For Sale By Owner) and holding open house 5 days a week. Nothing worked as the real estate market slump of 2007 spread to Oregon.

After showing the house to hundreds of people who loved it but could not afford the 600K price, Ray sought a more creative method to put some of these potential owners in this house. The result was an essay contest with the theme, “I/We want to win this house because…” in 100 words or less -- accompanied by a $200.00 entry fee. The contest started on January 2, 2008 and will close on June 30. The rules and forms for entry are available on their web site. Only 3000 entries will be accepted.
In addition to the first prize of the house; second prize is $5,000, third $3,500 and fourth is $1,500. More details are on the web site, “www.win-this-home.com”.

Sinclair states that should the contest fail to draw the required number of entries all entry fees will be refunded. Nearly 2200 entries have been received to date.
Posted by Geoff Gove at 10:42 PM No comments:

An Earth Burp From Methane Gases? 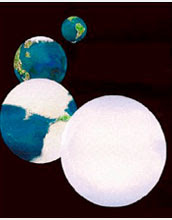 An abrupt release of methane, a powerful greenhouse gas, from ice sheets that extended to Earth's low latitudes some 635 million years ago caused a dramatic shift in climate, scientists funded by the National Science Foundation (NSF) report in this week's issue of the journal Nature.

The shift triggered events that resulted in global warming and an ending of the last "snowball" ice age.
Posted by Geoff Gove at 11:24 PM No comments: